Linux Can Do Windows Too!

One of the biggest reasons most people tend to avoid Linux is that the command line really lies at the heart of any *NIX environment ( UNIX, Linux and its legion of cousins).  The command line is scary...only one line of input, no visual cues or big flashing buttons that scream "click me" and heck no mouse either!  Luckily some hardworking code monkeys have developed many "windows managers" or graphical user interfaces (GUI's from here on in) to provide end users (and administrators) with a more visually stimulating interface to their machines.

One of the greatest strengths of Linux has always been its open nature and the flexibility it conveys.  This means that if a programmer is working within the confines of a GUI that they feel is restrictive they can dig into the code and alter it to suit their needs.  Now you might say "oh great every keyboard jockey will have made their own personal GUI and there will be too many to choose from!" while there are numerous GUI's to choose from a few have gathered numerous followers and as such attracted more developers that help support them.  So without further adieu I present to you some of the most popular GUI's for Linux.  Starting with the most popular to the niche.  This post is in no way meant to be a history lesson on the GUI's...just my take on them.


Gnome is the first GUI I used starting out in Linux..oh so long ago.  It is one of the two "big" GUI's (along with KDE).  I say big because it is heavily developed and fully modern.  Ubuntu uses it as their default GUI (although that might be changing now that they have developed their own Unity GUI) so it has had quite a bit of mainstream exposure.  It is also the default GUI choice for many live CD distros (Fedora, Debian, and others).  It is very Mac OS like (as seen below) and it is well laid out.  The "start" button is at the top left and the "sys tray" is in the upper right hand corner.  Over all it has a very intuitive layout for Linux newbies. 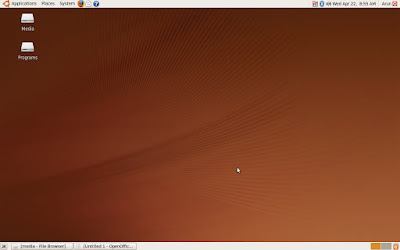 KDE
KDE runs very close "second" in the world of Linux GUI's.  Even though it isn't as widely used as Gnome it is my current desktop environment of choice for a couple reasons.  First, it is very "windows" like.  The "Start" button is where you would expect it to be, you can modify this to look almost identical to windows (if that is your thing) and the dolphin file explorer has a windows like flavor to it.  The main reason I like it though is the polish.  It is beautiful.  Lots of work was done to give KDE that WOW factor.  From transparency effects to cool desktop effects there is lots to see in KDE.  Think of Gnome as the kiddie pool, great for everyone but net enough depth...KDE is like a water park, fun for all ages ;) .  See below for a screenshot of KDE. 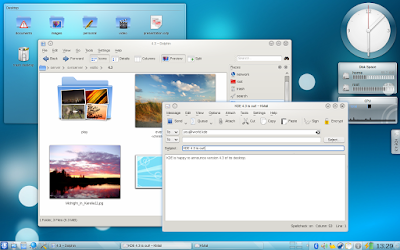 LXDE
From their site "The "Lightweight X11 Desktop Environment" is an extremely fast-performing and energy-saving desktop environment. Maintained by an international community of developers, it comes with a beautiful interface, multi-language support, standard keyboard short cuts and additional features like tabbed file browsing. LXDE uses less CPU and less RAM than other environments. It is especially designed for cloud computers with low hardware specifications, such as, netbooks, mobile devices (e.g. MIDs) or older computers. LXDE can be installed with many Linux distributions including Ubuntu, Debian and Fedora. It is the standard for Knoppix and lubuntu. LXDE also runs with OpenSolaris and BSD. LXDE provides a fast desktop experience; connecting easily with applications in the cloud. LXDE supports a wealth of programs that can be installed locally with Linux systems. The source code of LXDE is licensed partly under the terms of the the General Public License and partly under the LGPL."
I have not used the GUI before so I don't have an educated opinion on it, but I think it looks pretty sweet for how efficient it is (or claim it to be).  It has a pretty large user base so I would say it more than likely lives up to its claims. See a screenie below. 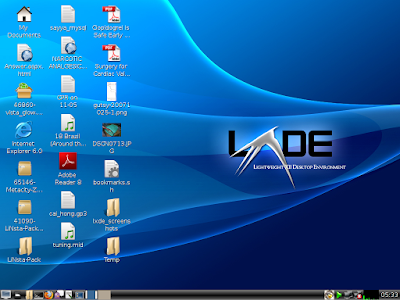 xWindows Managers
If you feel more comfortable on the command line, but just need to surf the web in 32bit color for a bit, check out the wide variety of xWindows Managers.  At their core they typically don't have anything too fancy, typically just a desktop and a task bar somewhere.  Their menu is usually brought up by right clicking on the desktop.  From there you can launch most applications.  One nice thing about these windows managers is that they are easy to customize in a variety of functional and cosmetic ways.  A couple popular flavors are Fluxbox, ICEWM, and Enlightenment (or just E).  The best thing about these managers is that they are typically very lightweight and are perfect for computers that either aren't very fast or where disk space is at a premium (like a live cd or bootable flash drive.  I typically install a xWindow manager on my old celerons and other similar systems.  Check out http://xwinman.org/ for more detailed breakdown of the GUI's.  Below are a couple screen shots of Fluxbox and Enlightenment.
Fluxbox 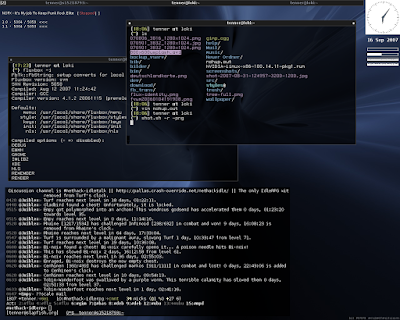 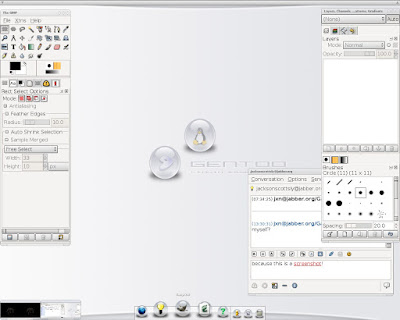